Mix Major And Minor Pentatonic Scales – Spice Up Your Solos 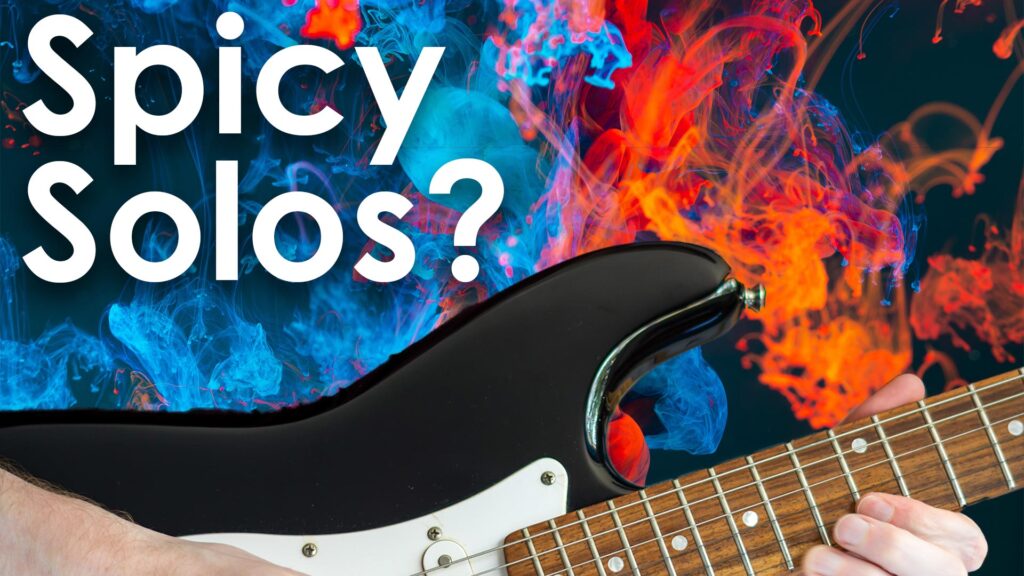 Why does this trick sound so great? In short it comes down to tension and release. If you stick to one scale in your improvisation the listener becomes accustomed to the sound of it. There are only five notes in the major pentatonic scale, and all of them are consonant. This is fine but there is little opportunity to create musical drama using the major pentatonic scale alone. The same is also true for the minor pentatonic scale. Although this problem can be mediated with slides, bends, and other articulations, another approach is to switch scales mid solo.

When to switch scales?

If you are going to try to mix major and minor pentatonic scales it’s useful to understand when it works well, and when it doesn’t. Without going into the theory weeds this trick works great in songs in a major keys, or songs where the key is ambiguous like in blues or rock.

I think of it this way. The major pentatonic scale is an incredibly consonant scale. It sounds great but there is very little tension in it. You can base a solo around this scale and then inject tension by switching to the minor pentatonic scale when you want to ramp up the intensity. This affect sounds bluesy and is a sound that our ears are already culturally accustomed to.

I don’t find this idea works the other way around. You can’t play a solo in minor key using the minor pentatonic scale and throw in the major pentatonic scale for added spice. It just doesn’t sound good in my opinion. I haven’t been able to find an example of it in popular music, but if you know of one please let me know in the comments. You should obviously try mixing pentatonic scales in both a major and minor keys yourself, but I think you will find it really only works well in the latter.

The I chord has very little tension as it is a tonic chord, the IV chord is the sub dominant chord and therefore has more tension than the I chord as it is further away from home base. The vi chord is another tonic chord, bringing us close to home base the tension is released somewhat. Finally we hit the V chord, this is a dominant chord and it is the point at which the chord progression cadences. As such the V chord is the point where the tension of the chord progression peaks, and then releases as we return to I.

Let me know in the comments which you prefer, for me it’s definitely the second one.

This is the general approach that I like to take when soloing over songs in a major key. I’ll use the major pentatonic scale, following the pattern of tension and release in the chord progression, switching to the minor pentatonic scale when I want to ramp up the tension.

Obviously the cadence is an easy place to start employing this trick. But I think it’s worth experimenting with changing to the minor pentatonic scale with each chord in the progression. This means trying to use it on the I chord, ii chord, iii chord and so on. This will give you an idea of what mixing the scales sounds like in each situation, helping you make better decisions when you improvise.

On my website you can get detailed practice notes on how to work on all the ideas taught in the lesson. Supporters of Olicana Music get access to all the lesson packs I make. These contain practice notes, tab, backing tracks, and other useful bits that will help you get the most out of the youtube lesson. Check out the link in the description to find out more.

We can take this a step further though by teasing the listener with the minor third.

The major pentatonic scale is very bland. It’s like someone is forcing you to smile all the time. Art imitates life and music is no different. Real life is not always happy, even the best moments can sometimes be bittersweet. How can you convey this through your music?

This is, in my opinion, when mixing the pentatonic scale is at it’s best. Let’s take a listen to what that sounds like.

Spice up your blues solos

With major keys out of the way, let talks about using this in a blues like Crossroads. The guidelines for a blues are very similar to those in a major key. You do however have a little more flexibility available to you as we’ll discuss in a minute.

The easiest way to start is to use the major pentatonic for the I chord, and the minor pentatonic scale over the IV and V chords. Here’s what that might sound like

Let’s take a listen to how it would sound if you were a little more flexible with when you switch scales.

The easiest way to get started when learning how to mix major and minor pentatoncc scales is to stick on a backing track in a major key. Start with the major pentatonic scale, then switch to the minor pentatonic scale. Keep switching between the scales when you feel like it. The purpose of this is to get used to the two scales, and to pay attention to when it sounds good to your ear to switch. The is pure experimentation so you can’t do it wrong, it will help you discover what works and sounds good. Here’s what it might sound like.

Putting it all together

I think like most things music, less is more. The drama created by mixing major and minor pentatonic scales is the product of surprise. If you switch continually the between the scales the listener will get accustomed to the sound of you switching. The cycle of tension and release will be lost because the listener will be able to predict it. In my opinion it’s better to tease the listener with the minor third before going for the right hook that is the minor pentatonic scale at the climax of the solo.

If you want the backing track to practice the exercise with, and more exercises to develop your ability to mix major and minor pentatonic scales check out the lesson pack below.

Want to get the most out of this lesson?

The lesson packs contains detailed notes on what to practice and how, a backing track, tab, and other useful learning aids.

Pay what you want for this lesson pack. Join Olicana Music as a supporter from as little as £1/Month to get all the lesson packs. Or get a Pro Membership to access the lesson packs and all my courses!

Already a member? Log In to get the lesson pack.

Take Me To The Lesson Pack

Sign up to the Olicana Music newsletter for notifications on new lesson releases, special offers, and to get your free copy of my eBook, Perfect Practice – How To Practice Like the Pro’s, so you can get the most out of my lessons.

Unsubscribe at anytime using the link in our emails. Your data will be processed in accordance with our Privacy Policy.

Do you want your solos to rock? In this weeks lesson I’ll share with you the top 5 rock licks that the pros use to write killer solos. I’ll show you how to play each...

How To Play Guitar Fast – The Magic Of Chunking

Read more
Olicana Music uses cookies to provide a seamless and streamlined experience for repeat visits, learn how you use the website, and remember your preferences. By clicking “Accept”, you consent to the use of ALL cookies. To disable some or all of our cookies, please visit the cookie settings.
Cookie settingsACCEPT
Manage consent