Do you want your solos to rock? In this weeks lesson I'll share with you the top 5 rock licks that the pros use to write killer solos. I'll show you how to play each the five licks, how to modify them to make them your own, and stick around to the end for an exercise that will teach you how to chain these ideas together to make your own solo. This weeks lesson pack is free, make sure you download it if you want copies of the TAB and backing track to practice the ideas from the lesson with. 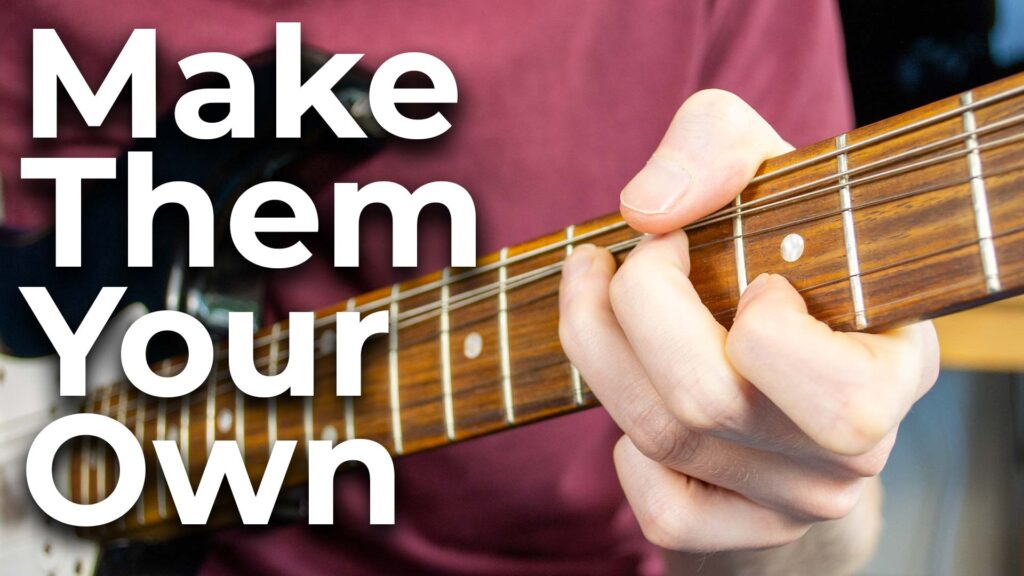 Try learning these top 5 rock licks. These licks feature in many classic rock solos and are a staple of the genre. Learn each lick note for note, then feel free to make them your own by modifying them. More tips on modifications can be found in the post on phrasing. Incorporate them into your vocabulary by using them intentionally in your improvisation.

It’s not really a lick, but you can’t really have a rock solo without string bending. String bending is part of the quintessential rock sound and should be a core feature of your solo if you want it to sound authentic. Maintaining a sense of melody is a critical component of an iconic solo. When you think of songs like Free Bird, The Final Countdown, Highway To Hell, or Hotel California. Every single one of these solos maintains a sense of melody throughout. String bends are a great way to create melody in a manner that retains the aggressive vocal quality of a rock solo. Let’s look at a couple of classic rock bends and how you can use them.

You can take this principle and do it on any of the top three strings of the guitar in this pentatonic shape. Any note that’s under your third finger will also work well as a bending point. So that could be fret 8 on the B string, or fret 8 on the high E string. Try come up with a melody for your solo and then make that melody work by bending the strings. Here’s an example of what that might sound like.

We can’t move on from string bending without quickly talking about unison bends. This is where you bend a string and match it to the pitch of the string underneath. For example if you play the G string at fret 7 and the B string at fret 5 you can match the pitch of the two strings by bending the G string. This creates a rub between the two notes that is resolved when they match. It sounds great, very aggressive, and very rock. You do this on the G and the B string, and the B and E string. These are unison bends and are prolific throughout rock solos.

You should experiment with creating melodies that use string bends. The melody you create will become the motif you build your solo around. The rest of the licks we’ll talk about can be used as cyclical and repeating ideas, which can often result in the melody and motif of the solo being lost. You can learn more about why motifs are important on my video on phrasing, but before you watch that lesson, lets look at lick two.

Double stops are another essential aspect of rock phrasing. Turning single note phrases into double stops thickens their sound and gives them a classic rock edge that can’t be achieved by one note alone. Inject a double stop when you want part empathise a part of the phrase to the listener

Let’s take a look at how to play this phrase. A barre on the fifth fret of the B and G strings creates the double stop. You can then riff around the stop with you third finger, shifting your first finger to the D string when you want to grab the note on the 5th fret.

You can create other double stops by pairing notes on adjacent strings in the scale. Or another great trick is to pair notes on one string with an open string and move it around to create a melody like this. Mess around with double stops, they’re a great tool to add some variety to your solo.

Lick three is all about looping ideas. Looping phrases are a classic feature of rock soloing, they’re prominent in so many solos it would challenging to create a definitive list of guitarists that use them. To name a few great examples, you should listen solos by Angus Young, Jimmy Page, and Slash. All three of these players feature looping licks within they’re playing.

This phrase takes the 7th fret on the G string and bends it up a tone. Then use your first finger to barre fret 5 of the B and high E. Play the phrase in a loop for the classic rock effect.

You can modify this phrase in a few ways. One of my favourites is to add two notes to the phrase to make it a five note lick. This pattern of groups of five against a measure of four sounds really cool. Or you could leave the top note out to create a Chuck Berry style lick.

The minor pentatonic scale is the alphabet of the rock language. Approaching it melody first is a guaranteed way to sound musical. But what if you want to sound a little more shreddy. Instead of just playing the scale up and down really fast, a more musical option employed by lots of players is to play the scale in sequences. This a creates a moving melody that the listener can catch onto and follow,

The most common example in rock vernacular is to take the scale an sequence it into groups of threes. This works ascending or descending, and is a great way to inject some excitement into your solo.

Other popular examples of sequences you can use are groups of four, five, or six. Each has it’s own flavour so you should experiment with them all and see which ones you like. You can also try coming up with your own sequences. This is a great way to create something that sounds original. You can’t really do it wrong so long as you pick notes out of the scale!

A more advanced option is to take sequences and combine them. For example you could alternate two different groupings of three for a slippery descending effect

Our final lick is another cyclical idea. It’s the product of taking a section of a pentatonic sequence and looping it upon itself. How you choose to end the cycle is totally up to you, ending with a bend on the 8th fret of the B string is a great choice.

You can take this principle and apply it to any pentatonic sequence you like. For example Zakk Wylde uses a loop from the pentatonic scales sequenced in fours.

Our super simple exercise is this. Once you can play each lick on it’s own we are going create our first solo using them. You are going to put the licks into a random order, and then over a backing track you are going to try and play them in that order. Here’s what that might sound like.

It’s not going to get ten out of ten for musicality, but the purpose of this is to force the vocabulary into your improvisation. This is the best way to integrate new phrases into your vocabulary, by forcing the licks into your solos eventually they will become an organic feature of how you play.

In the free lesson pack there is a backing track you can use to practice along with. Spend some time trying to create solos that purposefully use these phrases. Once you comfortably use the phrases as written, try modifying them to make them your own. There’s lots of other exercises you can use turn your phrases into your vocabulary into something new in my lesson on phrasing here and in the lesson pack below.

Notes on the backing track

Try the following exercises to integrate and expand upon the vocabulary you learned in the lesson.

Incorporating these ideas into your vocabulary

Modifying these ideas to make them your own

Take Me To The Lesson Pack

Sign up to the Olicana Music newsletter for notifications on new lesson releases, special offers, and to get your free copy of my eBook, Perfect Practice – How To Practice Like the Pro’s, so you can get the most out of my lessons.

Unsubscribe at anytime using the link in our emails. Your data will be processed in accordance with our Privacy Policy.

Mix Major And Minor Pentatonic Scales – Spice Up Your Solos

In this weeks lesson we’re going to talk about how to mix major and minor pentatonic scales. This iconic blending of scales will help you spice up your solos by playing with the ideas of...

How To Play Guitar Fast – The Magic Of Chunking

Read more
Olicana Music uses cookies to provide a seamless and streamlined experience for repeat visits, learn how you use the website, and remember your preferences. By clicking “Accept”, you consent to the use of ALL cookies. To disable some or all of our cookies, please visit the cookie settings.
Cookie settingsACCEPT
Manage consent